“Let them go back to Africa!”: Europe fails to cope with the influx of migrants

PARIS, November 26 – RIA Novosti, Daniil Nizamutdinov. According to the European border agency Frontex, there have been 275,000 attempts to cross the EU border illegally since January, an increase of 73% compared to the same period last year. The migration crisis has been going on since 2015 and the situation is getting worse. Outlaws are a time bomb that can blow up the Old World.

I’m looking for a better life

Most immigrants are not refugees at all. People are striving for a new life, leaving their homeland due to poverty and inequality in the hope of finding a better job. 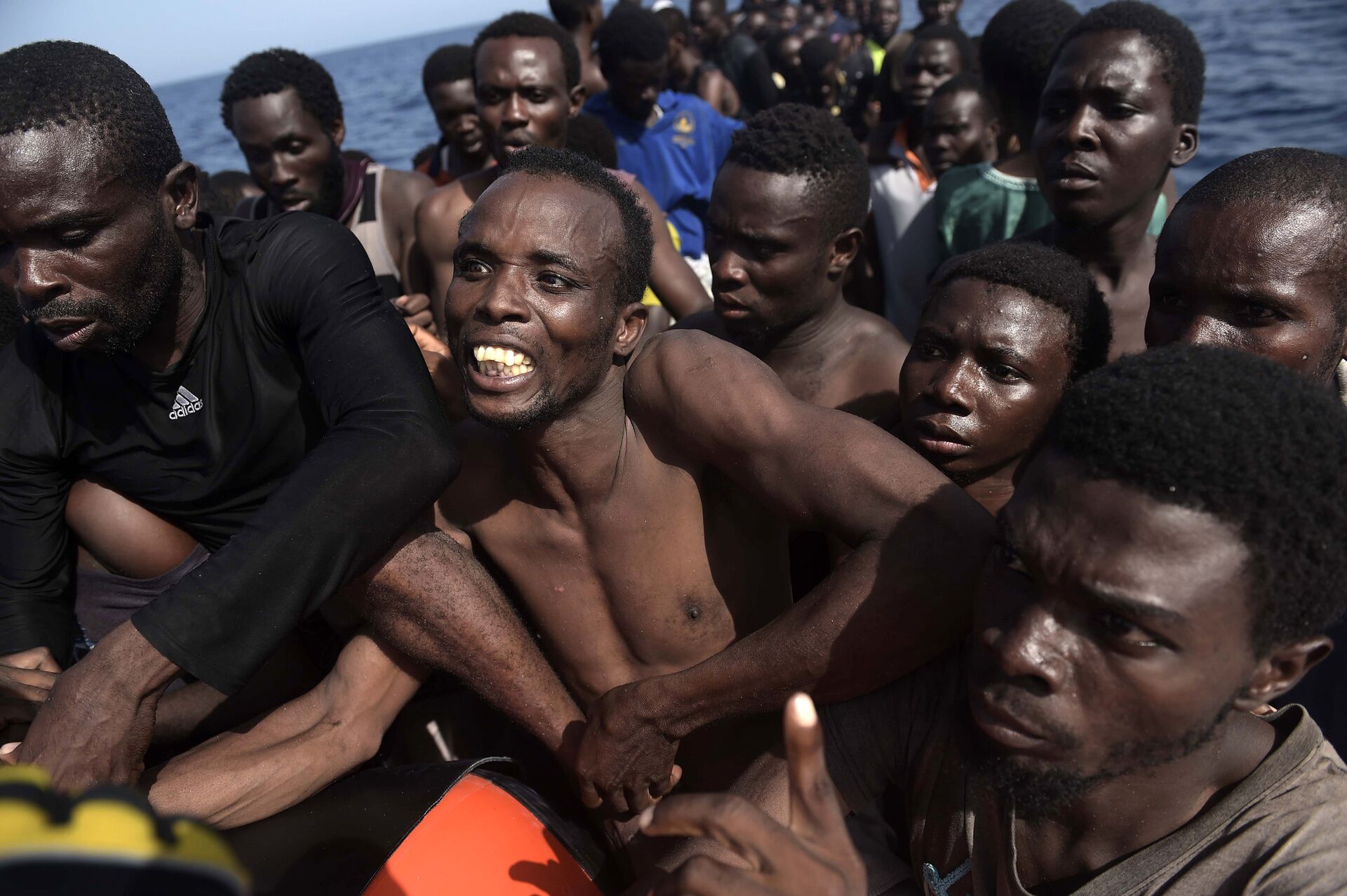 However, no one has been waiting for immigrants with open arms in Europe for long. Tens of thousands of people live in overcrowded, prison-like refugee reception centres, and many sleep in makeshift tent camps that police regularly demolish.

One of the main routes of illegal immigrants is to reach the coasts of Italy, Malta or Greece via the Strait of Sicily. People risk their lives swimming in overloaded boats, barges and rafts, for some the journey ends tragically.

At sea, boats are usually towed by NGO rescue vessels and delivered to ports. In fact, these are migrant taxis and covert carriers driven by these NGOs. Europeans are angry but they can’t do anything.

The situation has changed somewhat with the election victory in Italy of the centre-right coalition, which has pledged to resolutely fight illegal immigrants. At the end of October, the SOS Mediterranee ship Ocean Viking, carrying 234 refugees, was not allowed to enter the port, but those in peril under international law had to accept. The Maltese authorities, as a result, also refused, two weeks later, to allow the French Minister of the Interior, Gerald Darmanin, to anchor in Toulon “as an exception”.

At the same time, the French minister accused his Italian colleagues of being inhumane and called their actions inexplicable and unacceptable. In response, Prime Minister George Meloni pointed out that Europe’s mechanism for receiving and accommodating migrants was flawed and the injustice of refugees arriving mostly in Italian ports via the Mediterranean. According to him, of the nearly 90,000 illegal immigrants who set foot in Italy, only 117 were redistributed to other EU countries.

A scandal broke out in Paris. When French MP Carlos Martens Bilongo asked a government official about the fate of the Ocean Viking passengers, National Rally MP Gregoire de Furnas replied, “Let them go back to Africa!”

This caused a storm of anger, the meeting of the lower house was interrupted. It should also be noted here that in French this singular and plural sentence sounds the same, only the spelling is different (“Qu’il (s) retourne (nt) en Afrique”), so it could be Furnas’s exclamation. Being perceived as an insult to the dark-skinned Bilongo, who came from an African family.

De Furnas was accused of racism, suspended from his post in the National Assembly for two weeks and deprived of half his salary for two months. He resolutely denied the accusations – according to him, he meant illegal immigrants and did not try to offend a colleague.

According to Senator Bruno Retaio, one of the leaders of the Republicans, receiving the Ocean Viking in the port of Toulon is like opening a Pandora’s box.

He believes that ships with illegal immigrants should be deployed and provides assistance on board to those in need. Europe in general and France in particular can no longer take care of immigrants.

The leader of the National Union, Marine Le Pen, considers the attacks on Italy hypocritical, because in 2018, under the same President Macron, in a similar situation, the Bucket ship full of refugees was not allowed to enter France – he had to sail to Spain.

According to him, the president, whose party lost an absolute majority in the parliament in the last elections, now has to flirt with the always pro-immigration left. It also favors the repatriation of illegal immigrants to Africa.

Interestingly, the decision on Ocean Viking was even criticized by former Home Office head Gerard Colomb, a socialist who was a close friend of Macron in the past. He said authorities set a dangerous precedent by playing into the hands of illegal immigrants and the smugglers who profit from them.

And he added that it was precisely the disagreements with the president over immigration policy that forced him to resign four years ago. But a French interior minister has yet to appear who hasn’t said later that he wants to change immigration policy (but nothing happened).

In August, a record was recorded in England – more than 13.5 thousand illegal immigrants. In total this year – already 40 thousand. In the past, there were 28.5 thousand.

There is no place to accommodate refugees. The Resettlement Center in Manston is designed for 1.6 thousand people. Now there are about four thousand. Unsanitary conditions developed into epidemics of diphtheria and Staphylococcus aureus infections. There is a risk of fire and riot.

Accommodation for immigrants costs the British treasury seven million pounds a day. The Interior Ministry will place them on decommissioned cruise ships, university dormitories, abandoned military bases. The Scottish government chartered several ships for refugees from Ukraine. 1.7 thousand people live in one of them in Edinburgh.

Interior Minister Suella Braverman likened the situation to the invasion of the country. According to him, the system has collapsed, illegal immigration is out of control and politicians are covering it up.

He also pointed out that not all settlers obey the law: many are linked to criminals, and some are members of gangs. Speaking in parliament, Braverman said: “Let’s stop pretending they’re all in trouble. The country knows that’s not true.” said.

Because of immigrants, cheap suburbs like Paris, Marseille, Avignon, Toulouse, Nice have turned into dangerous ghettos where a stranger from a more prosperous region is better not to interfere: there is rampant crime and domestic violence, bandits, drugs. traders and arms dealers handle the ball. Some neighborhoods have actually become “illegal zones” – even the police are afraid to look there.

Someone still hopes for assimilation: secondary education, social benefits and a beautiful city park will supposedly make everyone a good citizen. Unfortunately, immigrants are often isolated only within their communities.

Recently, even President Macron admitted that half of crimes in Paris are committed by foreigners – illegal immigrants or those waiting for a residence permit. According to the head of the Ministry of the Interior, more than half in Marseille. But authorities cannot directly say that the increase in crime is related to refugees – it is taboo.

Every head of the Ministry of Interior talks about how he tried to solve the problem after his resignation. And soon the French government will propose a package of measures to “strengthen and strengthen”, which will not strengthen or strengthen anything – everything has been so neglected.

And the number of cases of sexual assault, robbery, and the use of sharp-edged weapons continues to increase. It seems that all the components of the bomb – economic, immigration, social crisis, rampant crime and radicalism – have already been put together. And it’s not cosmetic, if you don’t take really serious precautions, it can explode once you stop talking.

SKA forward Bardakov said that the match with Lokomotiv is at playoff level.st. PETERSBURG, 1 February - RIA...

Wounded Ukrainian soldiers. archive photo The prisoner said that the army of the Ukrainian Armed Forces, trained in England,...

Construction of a plant for the production of liquefied natural gas LNG in the United States. archive photoAmerican...

SKA forward Bardakov said that the match with Lokomotiv...

Construction of a plant for the production of liquefied...